Arbitration Team of the Month No. 24 – ABS Avocats 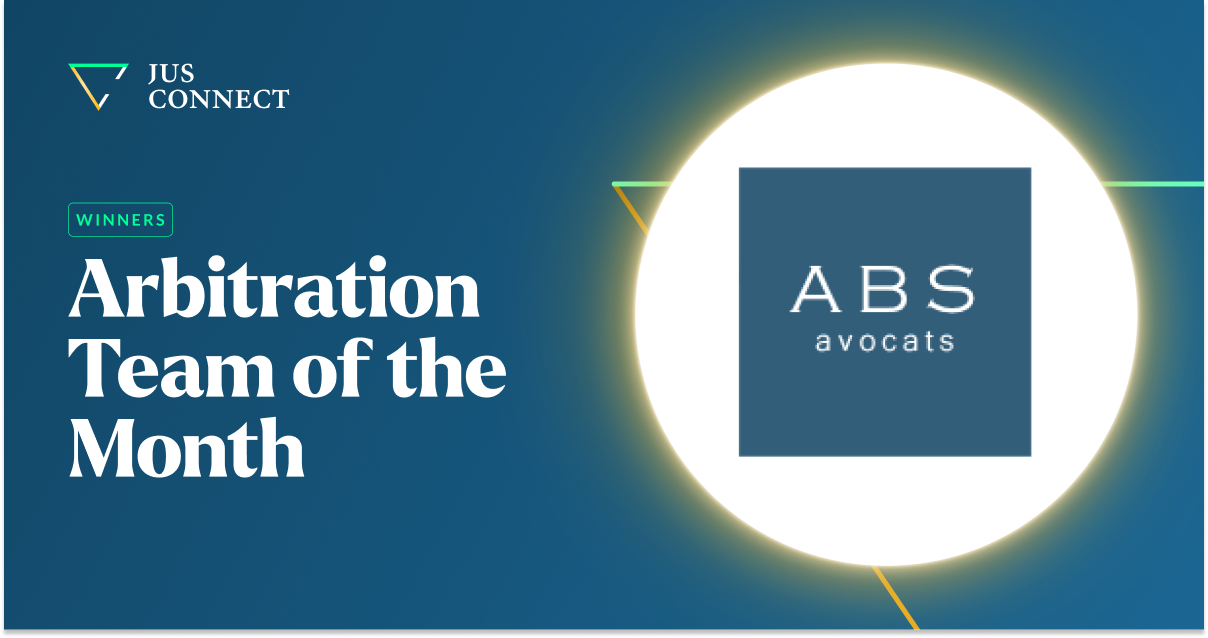 Jus Connect by Jus Mundi is pleased to nominate ABS Avocats as one of the recipients of ATOM for their success in the United Agencies Limited v. Algeria case.

ABS Avocats  areas of expertise include business law, corporate law, labor law, internal and international taxation, civil law, drafting of deeds (sale of business, shares and incorporation of companies). Thus, the firm aims to assist companies wishing to establish themselves in Algeria and to support its Algerian clients in terms of: legal advice, business law, internal and international taxation, labor law, international arbitration. Being very aware of the Algerian legal and economic environment, the ABS has developed modern organizational and professional methods, offering a multidisciplinary and adapted service, whether in terms of litigation and/or advice, in total adequacy with the needs of its customer base.

ABS Avocats has been involved in at least 2 international case(s) known by Jus Mundi (1 Commercial Arbitration and 1 Investor-State) in construction; and financial and insurance activities.

Me Mohand Tayeb BELARIF, Co-Founding Partner, discusses the development of arbitration as a dispute resolution mechanism in Algeria and on the African Continent, as well as the firm’s recent victory in United Agencies Limited v. Algeria.

ABS-Avocats is a law firm founded in October 2018 by Rédha ALEM, Mohand Tayeb BELARIF and Lamine SOUCI, whose initials make up the acronym ABS. It is structured around a small team of 10 lawyers specializing in business law, notably in corporate law and commercial contracts.

Me Mohand Tayeb BELARIF has been admitted to the Alger bar since 1985. He was a consultant to the Algerian Ministry of Industry from 2005 to 2008.

Me Redha ALEM has been admitted to the Alger bar since 2004. He particularly handles particularly public markets, administrative contracts, tax litigation, sale of assets, company administration, and exterior trade regulation.

Me Lamine SOUCI, who has been admitted to the Alger bar since 2013, currently work on  his PhD thesis at the University of Alger on the “Perception of Risks in Commercial Companies.”

The clients portfolio of the law firm comprises industrial and commercial companies, private and public entities, and national and international businesses.

The law firm is known and solicited by the country’s decision-makers in complex cases.

In any domain, visibility is essential for the evolution of professional activity. There can only be recognition if there is knowledge of our existence. It’s through seriousness and rigor in one’s work that, with time, one’s reputation will show itself in the eyes of the clients.

ABS-avocats is present in important economic and commercial events in the region and around the world. It is also present in legal manifestations, conferences, seminars, and congresses. We have established cooperation and mutual help with many law firms, associations, and professional organizations around the Mediterranean basin.

Since the founding of our partnership, we have been solicited by large international groups from France, Italy, the United States of America, Switzerland, Austria, Japan, China, South Korea, and others for legal advice, assistance in writing and negotiating contracts, and the representation of their interests in front of national courts and arbitration institutions (commercial and investment). Our reputation asserts itself each year.

There is no secret to forming and maintaining lasting relations with our clients. Listening to our clients is the first step to meeting its expectations. Listening and understanding allow us to identify our client’s needs, which is determining in finding the most relevant solutions for them.

Our law firm organizes twice a year a training course for its clients on news topics (investment taxation, finance, regulation of external trade, contract management, etc.) and informative days for a large audience on the significant evolutions of the internal and international legal landscape (national laws changes, new international agreements, the evolution of arbitral case law, etc.). These actions allowed us to consolidate our business portfolio, retain our clientele and favor the arrival of new clients.

Our law firm is implemented in the hearth of Northern Africa (Morocco, Algeria, Tunisia, Libya, and Egypt) with solid links to the countries of sub-Saharan Africa and the Middle East. Our knowledge of this environment allows us to bring appropriate responses to the preoccupations of the economic actors soliciting us to identify and mitigate their legal risks.

The dispute opposing United Agencies Limited SA (UAL) to the People’s Democratic Republic of Algeria came from the ban by the Central bank of Algeria (Bank of Algeria) to transfer the dividends from UAL’s investment in Algeria, Mediterranean Shipping Company of Algeria (MSCA), because the dividends mainly traced back to the Algerian subsidiary of the company, Maghrébine des Transports et Auxiliaires (MTA).

This ban targets dividends of the 2012 financial year transferable in 2013 and all the following financial years to this day. The sum of the non-transferred dividends is over 230 million US dollars.

The investment of UAL in MSCA was made through a capital contribution in a foreign currency, listed by the Bank of Algeria in accordance with the requirements of the order on investment, while MSCA’s participation in MTA’s capital was released in national currency.

The Bank of Algeria considered that the dividends from MTA to its mother company, MSCA, – even if they are included in the net distributable income of the latter – cannot be the subject of a proportional transfer when allocated to UAL, a foreign investor of which the transfer rights can only concern the part of the dividends generated exclusively by MSCA’s activity.

This approach is against the accounting norms governing the financial flows between mother companies and subsidiaries in Algeria and violates the guarantees given to foreign investors under the 2004 Algeria – Switzerland BIT.

The strategy we adopted to win this case for our client was based mainly on treaty law, and especially on the violation of the commitments taken by Algeria pursuant to article 5 of the the 2004 Algeria – Switzerland BIT. This article guarantees the free transfer of the revenue generated by investments made in the host State’s territory by the investors of the co-contracting State.

New technologies have significantly improved and enriched the panoply of tools lawyers can use. They allow an extraordinary expansion of the means at our disposal to investigate and research information, which considerably reduces the time spent on legal research, and allow for a better organization. However, they cannot replace the human dimension, i.e., the intellectual reasoning.

In our geographical, political, and social position, we consider that the most pertinent index for the development of a country is the level of usage of the legal norm. African countries generally suffer from a considerable deficit of efficient legal norms and a weak use of the existing ones. This creates an inconsistency in economic and social relations and, thereby maintain a legal uncertainty unfavorable to local investment and a mistrust of potential foreign economic partners.

The legal profession can contribute greatly in restoring the authority of the law, and simultaneously, in enhancing States’ legal systems.

The big disruptions the planet has faced in the past years (pandemic, aggravation of climate change, wars, etc.) have resulted in a level of insecurity that has direct repercussions on businesses (breach of the economy of existing contracts, failure to respect contractual obligations, extension of the performance deadline…etc.). Disputes arising from these issues will multiply, and lawyers will be solicited significantly more to resolve them. On the contrary, the multiplication of risks will most likely result in a decrease of business activities at a global scale, which might mean that lawyers will be less solicited in their mission of assistance and counsel for the promotion of new business.

The AfCFTA Agreement entered into force on May 30th, 2019 and trade under the Agreement started on January 1st 2021. It created the biggest free trade area in the world (with 55 Member States). The Agreement provides for the reduction of tariffs by 90%, which could promote intercontinental trade. However, the influence of powerful lobbies should not be neglected as they could slow down the inter-African States trade (China, Russia, Turkey, and old colonial powers). Moreover, AfCFTA’s dynamic depends on the adaptation of the legal and institutional landscapes of each Member State, which are not currently suitable for the development of business.

This regional integration, which aims to encourage the free circulation of people, capital, goods, and services will inevitably give rise to disputes between economic operators of the Member States. It is at this stage that international arbitration will establish its place in the dispute resolution process. It is important to note, however, that African businesses are often small companies and family groups which can lack the adequate legal structure to properly conclude and execute contracts. Very often, these economic entities consider the cost of arbitration as prohibitive and resort to occult intermediaries to resolve their problems.

In this situation, the integration and harmonization of legal norms are indispensable. It will allow for uniformized dispute resolution institutions, rules, and mechanisms and establish legal security at a continental and international level.

Institutions like the Organisation for the Harmonization of Business Law in Africa (OHADA), precisely offer a solid base for legal integration through harmonization, unification, and uniformization of the legal norm. The experience of OHADA arbitration is very encouraging and can form a center that can federate all the AfCFTA Members.

Congratulations to the team once again! Jus Connect by Jus Mundi wishes them nothing but success.

Legal Intelligence Made Easy With the New Monitoring & Alerts Feature 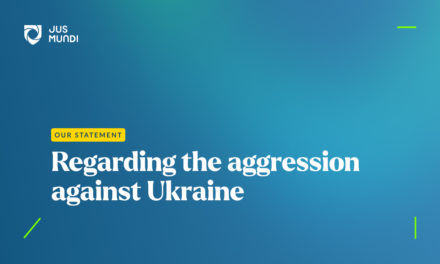 We stand by the Rule of Law 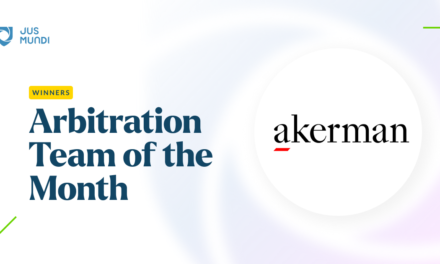 Arbitration Team of the Month No. 20 – Akerman 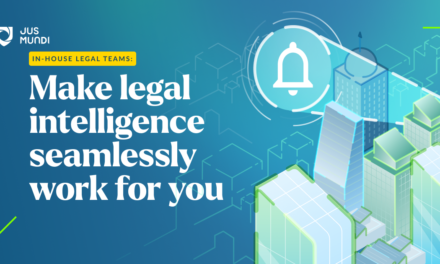